Reliability and resilience are key aspects of utility performance. These measures matter to the utilities, their customers, and to regulators.

A new report on Trends in Reliability and Resilience shows that, for the U.S. and Canada, the underlying System Average Interruption Frequency Index (SAIFI) and System Average Interruption Duration Index (SAIDI) metrics, when excluding major events, have been largely flat or increasing (worsening). This is in contrast with some other jurisdictions, such as the United Kingdom and Australia, where financial incentives have generally driven a pattern of improvement. 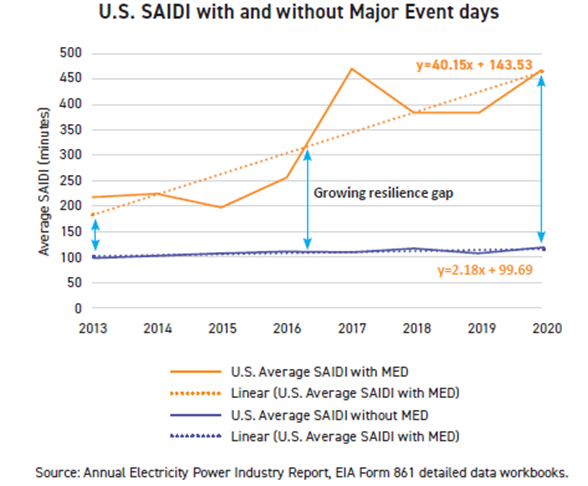 The same pattern also is occurring in Canada, where a varying but generally growing gap exists in SAIDI when the inclusion and exclusion of major events is considered. Based on the linear trends, SAIDI, when including major events, is growing at a rate of 10 minutes more per year than when excluding major events. See chart below. 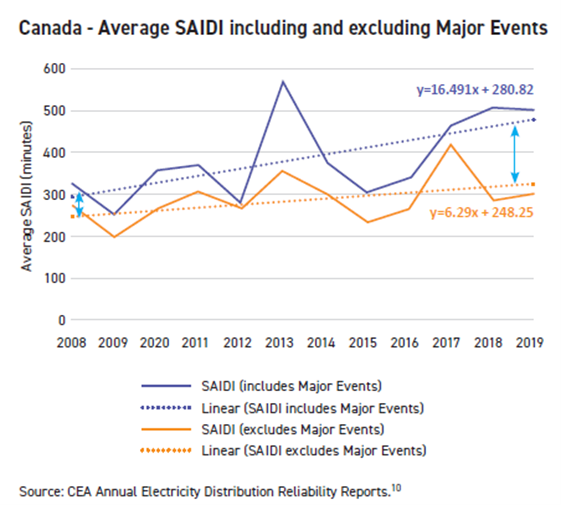 This ties to evidence of growing threats from severe weather events seen in broader climate and governmental data. However, this contrasts with a range of other countries where ongoing improvements in reliability have maintained or reduced the resilience gap, despite severe weather events becoming more common.

The importance of a reliable and resilient grid is continuing to grow as society decarbonizes and embraces the electrification of transport and heat and as societies are affected by more frequent severe weather events.

As such, it is important to consider the options available for improving reliability and resilience. These include more preventative actions to reduce the risk of faults occurring as well as steps to improve the response when faults occur. Options include grid segmentation, distribution automation, distribution infrastructure hardening, and undergrounding.

Investment must be undertaken to ensure the distribution grid is resilient not only for today’s weather conditions, but also for the climate in 2030, 2040, and 2050.